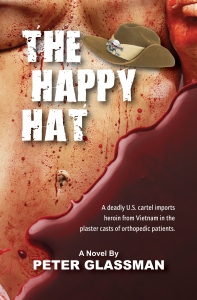 THE HAPPY HAT is a medical thriller, crime drama, and unusual love story taking place in one of the Navy’s largest stateside military hospitals. The story is based on actual events during the Vietnam War which the author relives through fictionalized characters.

An FBI agent undercover as a Navy corpsman follows a patient in a total body cast from Vietnam to Queens Naval Hospital. The cast contains a half-million dollars in heroin waiting to be picked up by a Brooklyn biodisposal team of killers. The New York cartel disposes of any internal or external threat by filming their torturous murders. Chief Corpsman and FBI Agent Isaac Kaplan agonizes trying to filter out the who, what, where’s, and whys of the heroin smuggling ring, which endangers several lives and the one Nurse who may be the leader–the one he falls in love with.