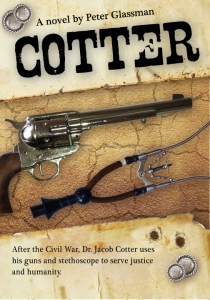 Jacob Cotter dropped out of Yale Medical School in 1863 to enlist in the Union Army with his father Dr. Edward Cotter, then Chief of Medical Staff at Yale. Upon Edward’s murder by Confederate raiders at the battle of Nashville, Jacob Cotter is disinherited by his brother and sister. After the war Cotter becomes a bounty hunter to obtain money to return to Connecticut and complete medical school at Yale. He finds that his siblings have monopolized the valley wine industry through force, murder and intimidation. At Yale, Cotter works with the Colt Firearms heiress to set up his own vineyard. Violence ensues as Cotter and his hands confront efforts to burn him out.

After Yale he sets out for Endura Texas. However, he finds 1872 Endura Texas a battleground like the New Haven he left. Victor Vlack, cattle baron and Endura’s largest landowner runs for state congress to thwart Endura becoming a city. Opposition to Vlack’s murders, pillaging and barbed wire oppression comes from Cotter and his physician colleagues. Cotter becomes his vigilante alter ego to confront Vlack’s moves. Cotter also finds his father’s killers working for Vlack. Vlack targets his Clinic and his staff for destruction. This includes his ether anesthetist, Mortimer Pignast, who runs for election against Vlack. Cotter falls in love with the Clinic’s widowed head nurse and her children. He’s torn between being a humanitarian physician, family man and his quest to avenge his father’s murder.